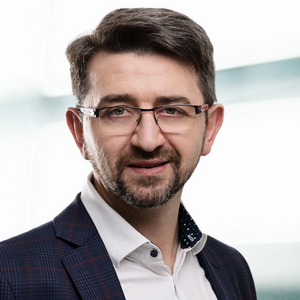 Grzegorz specializes in advisory for clients from the manufacturing, real estate and energy industry, with a particular focus on M&A and real estate transactions as well as restructuring processes. His track record includes advisory in a number of M&A transactions (sell-side and buy-side) for Polish and international enterprises.

In the years 2007-2015 he worked as Senior Associate and later Partner at BSJP Brockhuis Jurczak Prusak sp. k., in the Mergers & Acquisitions and Corporate departments, where he was responsible for numerous transactions and restructuring processes. In 2015-2018 he was Associate Partner at Deloitte Legal, where he served as Head of German Desk, and was responsible for transaction and restructuring advisory for clients from the DACH region.

Grzegorz has graduated from Adam Mickiewicz University in Poznań, European University Viadrina in Frankfurt (Oder) (Master of German and Polish Law) and studied on scholarship at the University of Zurich. He has also completed Postgraduate Studies in competition law at the Polish Academy of Sciences. He is fluent in German and English.